In my previous post I revealed that, to craft a great (technical) presentation, I deliberately use storytelling techniques borrowed from contemporary screenwriting. I leverage the power of story to stimulate an emotional response, even a new behavior, in the audience.

This approach comes from the realization that, although important, rational thinking has its limits. Even if we have facts that prove that we are “right”, it doesn’t mean that people listen to us.
By framing a subjective point of view, however, a story can influence perceptions, reinterpreting and directing what those facts mean to our audience.

If you happen to believe that stories are just for entertainment, think again. Stories are powerful, even frightening, weapons of influence. They have been used for thousands of years to persuade masses to join religions and wars, to unite and divide, to discriminate between “right” and “wrong”.

I’m often told that storytelling is too difficult. Yet, we unconsciously tell stories to others and ourselves on a daily basis. We tell who we are, what we have done, what we value, etc. We strip out all the unnecessary details and use stories to package our experience, or the experience of others, for easy consumption.

Aristotle observed that traditional narrative is structured around a dramatic story told in 3 acts: beginning, middle, end. I was surprised to discover that, after thousands of years, Hollywood-style screenwriting is still firmly grounded around this structure.

In a future post I’ll examine it in more detail, but for now, I’ll just state the obvious: a good story starts with a good idea.
What’s a simple definition of a good story idea (to be told in 3 acts)?

Someone wants something badly and goes after it against great odds.

I learned this definition by heart (and I wish I could recall where I found it). This simple sentence embodies three key elements of a good story: Character (“someone”), Desire (“wants something badly”), and Obstacles (“and goes after it against great odds”). 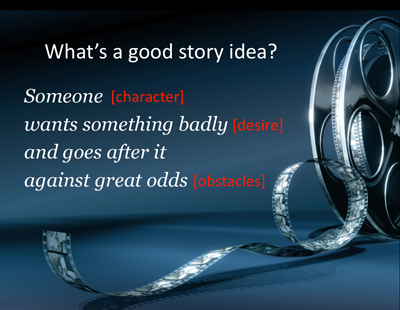 I’m just scratching the surface here, but watch a movie tonight and see for yourself.

It might seem obvious, but the story ends when the answer to the dramatic question is revealed.

When I performed my “Agile Tales” presentation in Stockholm for the very first time last year, I distilled a story from my own experience. Back then I didn’t know anything about storytelling.

Coincidentally, I had a character (me), plenty of obstacles (IT project from hell), and strong desire (I didn’t want to fail!). It’s a classic case of something that works without knowing why!

The story was about overcoming obstacles using agility, effective communication, and deliberate creativity.
Early in the presentation, I explained that I was involved in this impossible IT project. All the odds were stacked against me.
The setup was excellent, wasn’t it? But then I said:
“Amazingly, project from hell was a success. Maybe this is why…”

Do you see what I did? I made a rookie mistake.
I resolved the dramatic question too soon, effectively releasing the tension I created.

Several months (and more than 50 screenwriting books) later, I said instead:
“Project from hell was threatening me. This is what I tried…”.

The facts were exactly the same, but I plotted the story differently. This simple modification allowed me to preserve the tension until the end.

Next time, I’ll continue this fascinating exploration into the world of storytelling by revealing a technique I learned from a two-time Pulitzer Prize winner.
Stay tuned.